When Communities Support Their Libraries, Everyone Wins

The Chestatee Regional Library System recently opened the new Lumpkin County Library, in part due to strong local support. The old building did not meet American Disability Act standards, and it was so small that patrons did not have room to comfortably utilize the space.

The new building added 12,000 square feet of space, including four tutor rooms, conference and technology rooms, and a computer lab. There is space for children’s activities, STEM materials, and teens.

Several community members purchased naming rights to rooms in the library. The county was able to purchase all of the equipment, technology, and furniture that was requested. The new space will serve the community for years to come.

Celebrating their 25th anniversary this year as an independent library system, the Forsyth County Public Library enjoys tremendous community support for its four branches (a fifth is scheduled for completion in 2023). A dedicated friends and advocates group, as well as many local partnerships, are critical components of their success.

As the county has grown and diversified, the library has evolved to meet its community needs through the addition of an extensive world languages collection in Hindi, Korean, Mandarin, Marathi, Spanish, Tamil, Telugu, and more; outreach to senior centers, parks, and schools; and regular bookmobile stops to serve residents who have difficulty traveling to their branches.

In 2020, Marshes of Glynn Libraries received an anonymous request asking how the library could support early literacy efforts in Glynn County if they received $5,000, $10,000, or $25,000.

An eventual donation of $25,000 led to the creation of the Take 5 outreach program.

The library partnered with FACES Prekindergarten Center and Leaps and Bounds programs located in Brunswick, which serves the lowest socioeconomic area in the county. For five weeks, the 200 students at the schools each received a new Take 5 bag. The fabric tote bags contained two high-quality books directly tied into that week’s theme, toys that helped reinforce that week’s theme, a flyer for caregivers with instructions on how to guide their child with that week’s kit, and a giveaway book.

“This was an easy program for us with a huge amount of impact in parental involvement,” said Library Director Geri Mullis. “After seeing the program’s success, we have received additional private funds to continue as well as have applied for federal funding to grow the program to every public pre-K program in our county.”

Local support for libraries builds when libraries support their communities. The Athens Regional Library System looks for ways to strengthen these relationships by partnering with local businesses and organizations across their region (Athens-Clarke, Franklin, Madison, Oconee and Oglethorpe counties).

The participating businesses each offered a discount or promotion when customers presented a library card at checkout, and many of the businesses also donated gift cards to give to patrons in prize drawings.

Starting in April 2021, Athens-Clarke County Library has also worked with a group of local nonprofit organizations, agencies, businesses, and community leaders to hold a series of virtual community discussions and events surrounding the book “Stamped: Racism, Antiracism and You” by Jason Reynolds and Ibram X. Kendi, funded by a federal grant from the Institute of Museum and Library Services.

As part of One Book Athens: One Book, Many Stories, residents had the opportunity to get free copies of the book available at various locations around Athens, including free audiobooks, and the library was able to strengthen community bonds through dialogue.

The initiative even hosted a free virtual event with authors Reynolds, Kendi and Dr. Sonja Cherry-Paul, and moderated by Dr. Valerie Boyd of University of Georgia, in July 2021. 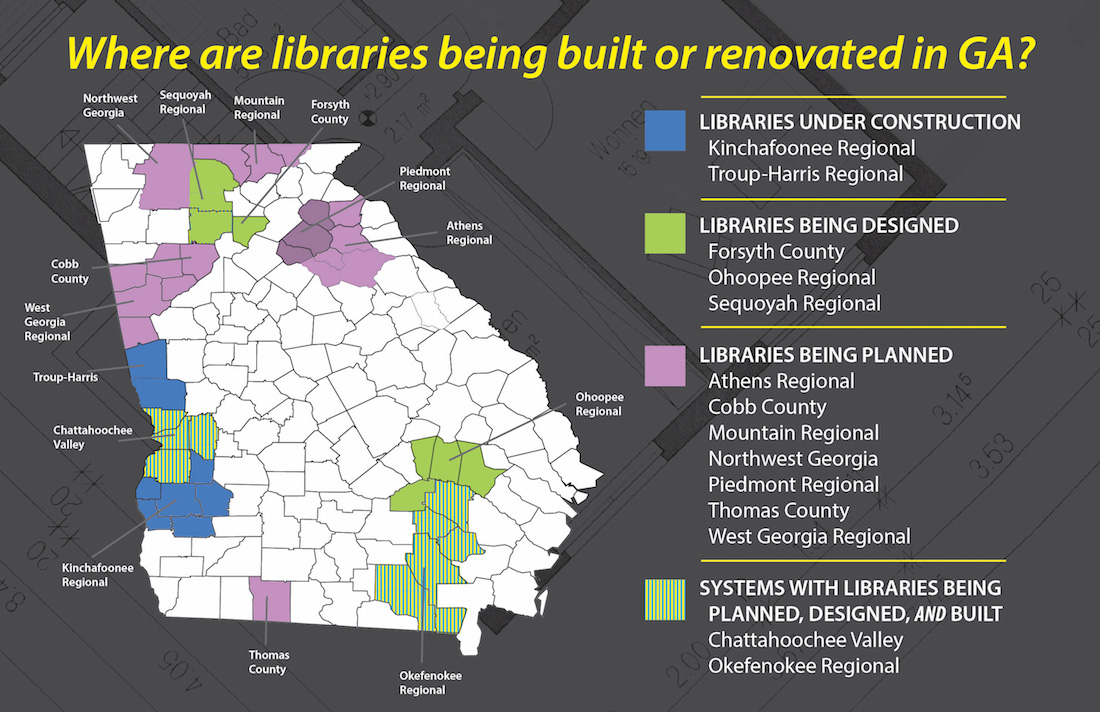 How are library construction projects funded?