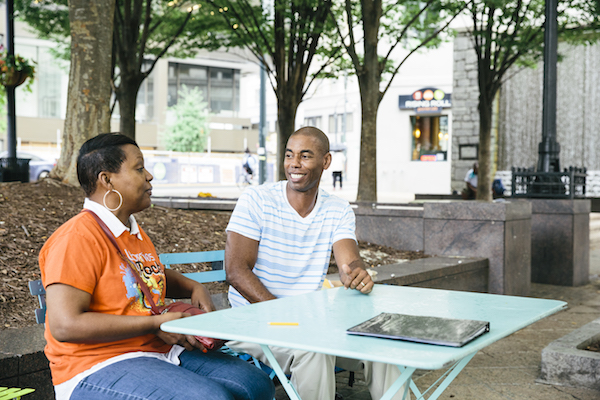 Under the green roof of a pop-up event tent among the tall trees of a central Atlanta park, community engagement librarian Amanda Densmore straightens chairs across a handful of tables as she checks that laptops have powered up. A few minutes later, people start trickling in. Some are regulars, eager to use the free computer access to email friends, look for a job or housing opportunity, or catch up on the news. A few individuals are hesitant at first, not sure if the computers are for them.

“I’ve had more than one person tell me that they don’t know how to use a computer, and when I offer to show them, they have been genuinely surprised and delighted,” said Densmore. “By being in the park, we are closing that last barrier between library service and the patron, because we are meeting people where they are, not asking them to visit us.”

Offering Wi-Fi and computer technology in public spaces is one of the many efforts public libraries are making to combat Georgia’s gap in internet access. While especially pronounced in rural areas, the divide affects patrons throughout the state, including the homeless population in metro
Atlanta.

“There is no arguing any longer about how crucial it is to have access to information and communication technologies, and libraries are doing everything they can to make sure no one is left behind,” said Emily Almond, the chief technology officer at Georgia Public Library Service.

Fulton County Library System’s Library on the Lawn was launched to meet community needs during extensive renovations to the Central Branch, but an unexpected benefit has been the ability to provide resources to those who wouldn’t typically come inside a library. With the help of staff, passersby can also learn more about library services, digital resources, sign up for library cards, or just use a computer and free Wi-Fi.

Ron McKinney recently used one of the laptops to apply for a job at a local restaurant, and Densmore was able to help him navigate how to get to the restaurant’s website, as well as offer tips for ways to answer certain questions like, “What does hospitality mean to you?”

“He was a little intimidated to type anything, but when I asked him to just tell me what he felt, he was very thoughtful and said a few great points that we were able to type in the application,” said Densmore.

McKinney said that he uses Library on the Lawn frequently to search for jobs and appreciates the service. Library staff regularly assist patrons like him with applying for jobs online, and they sometimes hear back when individuals are successful in getting one.

Library on the Lawn is offered Monday to Wednesday from 10 a.m.-4 p.m. at Woodruff Park, except when the weather is bad.

Further south in Georgia, the Twin Lakes Library System now offers web access free to visitors of Milledgeville’s public parks including the Oconee Greenway, Central City Park, and Huley Park. The library was one of just eight national recipients of this grant-funded project from the Institute of Museum and Library Services.

Millions of people across the United States rely solely or in part on public libraries to access the internet, according to grant administrator Gigabit Libraries Network. And in Milledgeville, a rural city of about 18,600 residents, the library is a key internet provider for many.

“Our library strives to deliver free access to its services to all community members, and this is part of our mission of connecting our resources to our patrons,” said Stephen Houser, director of Twin Lakes Library System. “This grant allows us to be at the forefront of library services, especially in rural communities, while also adding value to taxpayer dollars by expanding the availability of the services that we already offer.”

Houser said that about 2,000 users access the free Wi-Fi every month to study, connect to social media, apply for jobs, and more.
The library found community partners like the Oconee Greenway Foundation and Georgia Power to launch the project, as well as the City of Milledgeville.

Georgia’s public libraries have long been a technology and internet trendsetter – the state was one of the first to have high-speed internet access in every public library – and through Georgia Public Library System Georgia is the only state that offers matching funds to completely cover a library’s internet service bill.

Bringing high-speed internet and technology to people in public spaces is another way Georgia’s public libraries can effectively adapt to meet the changing needs of their communities.