Hart of the Library 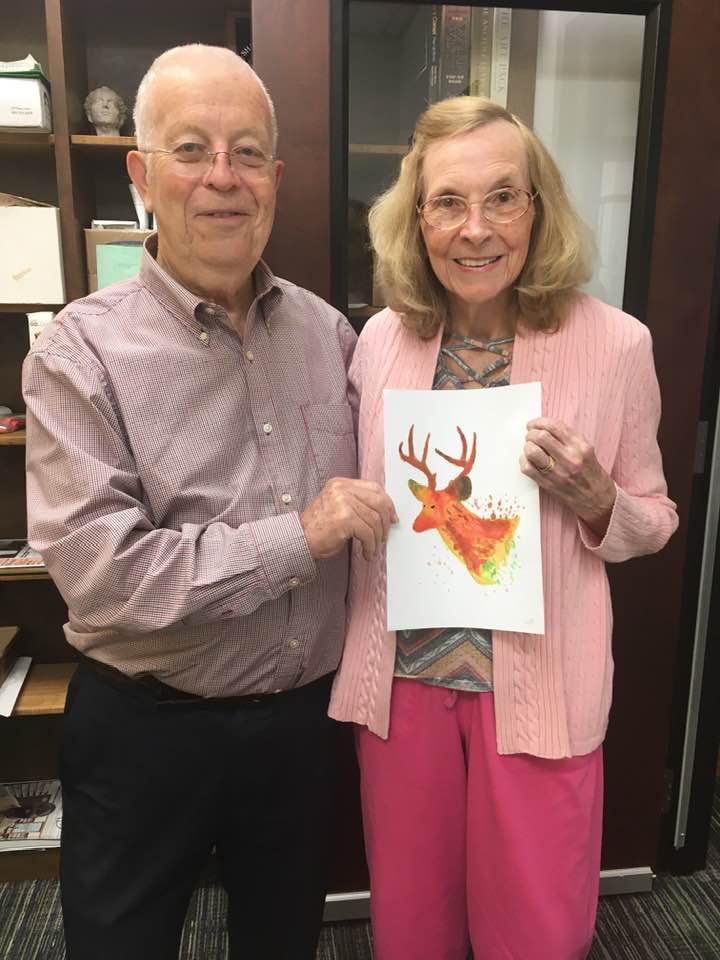 Tom Hart and a student, Joan, with her first watercolor painting. After a career as a librarian, professor, and library designer, Hart has gained a reputation for being a great watercolor instructor at the library.

Every Thursday morning when we walk down the stairs to open the library, at least one person is there waiting and asks, “Is Mr. Tom coming today for watercolor?”

What started as a hobby became an unexpected passion for retired librarian Tom Hart. Semi-famous in the south Georgia, north Florida area as a former instructor at the School of Library and Information Science at Florida State University, Tom has also worked as a consultant for libraries, and he can even be occasionally heard rallying the pledge drive for the local NPR station.

Tom first became involved with the Roddenbery Memorial Library in Cairo, Georgia, in the 1970s. He would bring his library school students to look at the state-of-the-art audiovisual system, and it was then that he met Wessie Connell, Roddenbery Library’s founding director.

As their friendship grew, Hart began taking library staff to listen to lectures at the university. After learning about Hart’s work on various building projects, Connell invited him to consult on the library’s renovation in the 1980s.

“Miss Wessie envisioned the library as a community center and a museum. She recognized that for many patrons, the library might be their only opportunity to visit such a place,” said current Library Director Janet Boudet. With its marble walls, airy ceilings, art collections, and beautiful garden areas, the Roddenbery Memorial Library is a focal point in the city. Connell saw Hart as someone who could help bring this vision to reality.

Tom went on to design other libraries in the United States and across the world, including Lima, Peru; Alexandria, Egypt; and Paris, France.

After retiring from teaching in 2005, he started watercolor painting as a hobby. In 2011, a former student of his, Pamela Grigg, became the director of the Roddenbery Memorial Library, and Tom’s involvement with the library was renewed when she invited him to teach watercolor painting classes there.

It didn’t take long for the weekly class to fill up. The classes were packed elbow-to-elbow into a makeshift space. As the library began planning its next renovation, completed in 2019, it became clear that the library needed a classroom dedicated to adult learning, and the library’s makerspace was born.

Once the renovation was complete, Tom and the class were free to meet with more room to move. As word spread that the library was open again, more students began showing up. One group in particular, a special needs learning group, became regulars. And after Tom learned that not everyone was able to come because of transportation issues, he decided to take the class to them. It wasn’t long before he offered to teach the class at the local senior center as well.

“Who knew, of all the things I have done in my life, this would be the most rewarding,” Tom said of teaching the watercolor class. For this retired librarian, teaching in the library became a way to fulfill and share a passion.