Public libraries preserve their community’s history through unique local collections. They are a great place for ordinary people as well as researchers to gain insights.

Georgia HomePLACE, the digitization initiative of Georgia Public Library Service, recently made available online a Catholic liturgical codex, or bound manuscript, believed to be Spanish in origin and likely hand-lettered by a monk around 1580.

The codex is a precursor to the modern book. Each page is written in Latin and filled with colorful calligraphy from the Catholic Tridentine mass.

The mass was approved at the Council of Trent in 1570, only 10 years before the book’s creation. This “old mass” was in use until the 1960s. The codex includes excerpts from the book of Matthew and musical notation for Gregorian chants and hymns. 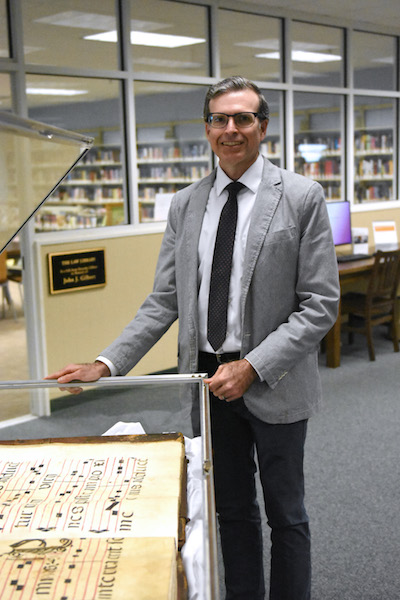 Ben Bryson, assistant director at Marshes of Glynn Libraries, stands next to the codex on display at Brunswick Library.

The codex made its way across the Atlantic Ocean following the dissolution of the Catholic Church in England by King Henry VIII and changed hands at auction several times. In the 1970s it was purchased by a private collector with roots in coastal Georgia and later donated to the Brunswick-Glynn County Library.

The library sought to preserve it through digitization but didn’t have the resources to do so.

Imaging of the codex was made possible because of a partnership with the Auburn Avenue Research Library, part of the Fulton Public Library System, and Georgia HomePLACE, the digital projects unit of the Georgia Public Library Service.

A library staff member packaged the codex by placing it inside a custom, impact-resistant and shock-proof case and drove it five hours from Brunswick to Atlanta.

The Auburn Avenue Research Library is the only institution in Georgia with a scanner large enough to accommodate the book, which is over 4 feet wide when open. Each page was carefully placed under scanner and imaged at a very high resolution.

The codex was returned to Brunswick in time to be displayed at the reopening of the renovated library in April 2019.

This is a very unique item, one of many interesting, historical pieces in public libraries across Georgia. You can find a list of other treasures in our public libraries by searching “Georgia Treasures” at georgialibraries.org.

Georgia HomePLACE has facilitated the addition of more than 600,000 images to the Digital Library of Georgia, allowing free, online access to primary sources on local history. n